Soviets are preparing with a fresh layer of paint.  My friend Thom and I have decided to take our Team Yankee figures and base them for Platoon level of play.  The systems we are looking into are No End in Sight, and Disposable Heroes using some modified rules.  Both Thom and I are not fans of the parking lot effect of company level gameplay and therefore we figured we could pull back the scale for some tactical fun!  So you have seen the soviet tanks already dipped (Though I have some T55’s on the way)

I have used a combination of Team Yankee and Plastic Soldier Company Soviet Infantry to begin my platoon with 4 teams plus 1 command team.

Teams are set at 7 men which includes 1 RPG and 1 RPK-74. One team, I exchanged the RPG for AA Launcher, and one team has a sniper detachment.  I used the platoon layout from Cold War Gone Hot small Soviet Force Engagement.  I found this book to be a great guide on some situational force organization and packed full of scenarios! 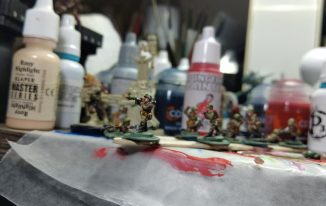 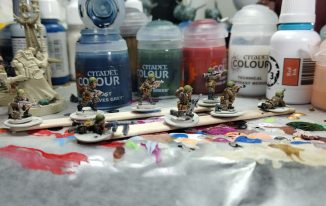